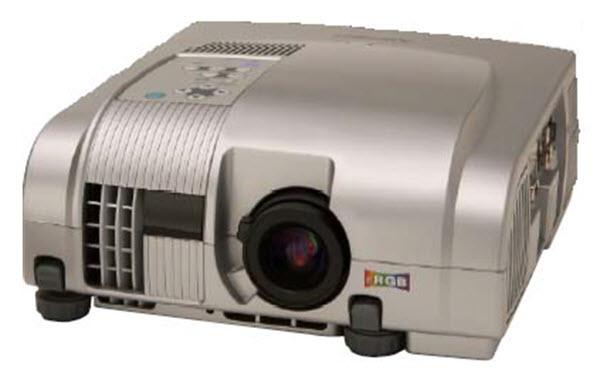 Ever since the launch of ProjectorCentral in 1999 and until very recently, we did not recommend SVGA resolution LCD projectors for video applications for two reasons: Contrast performance was lacking, and the visible pixel grid was too intrusive. While DLP projectors had their own problems and image defects, their ability to produce a higher contrast image with less visible pixelation made them a preferred selection for video usage in the SVGA resolution category.

Time and technology marches on. You don't need to spend much time watching the Mitsubishi HC2 before you realize the truth has changed. SVGA resolution LCD projectors are not what they used to be. This unit combines great color performance and improved contrast with much reduced pixelation. The result is a projector that delivers a beautiful, engaging video image in an economy class package.

The HC2 is a crossover product that is, oddly enough, designed to cross over in the opposite direction. It is promoted as a "home cinema" projector. Indeed it is among the most feature-rich projectors for home entertainment use in its class. But at just 6.5 lbs, it is quite portable. So if you want to sneak it out of your home and into the office or classroom, it has all the features you'd need to use is as a part time business or classroom presentation machine as well.

The connection panel offers composite, S-video, and a single 15-pin VGA port for component video, HDTV, and computer input. There is a 15-pin VGA out for monitor loop-through and audio input to drive the single on-board speaker. Both of these features increase the HC2's functionality as a business or classroom projector.

The HC2 has a Picture-in-Picture option that lets you view two of the three sources (composite, S-video, or computer/component) at once.

The HC2 has extensive color calibration and color temperature control. You can make individual adjustments on red, green, blue, yellow, cyan, and magenta, as well as a separate saturation control. There are three pre-programmed color temperatures--standard, high, and low. However you can also program your own with contrast and brightness controls on red and blue.

The projector has two operating modes: sport and theater. Sport is the brighter of the two. Fan noise is moderate but not too bothersome in this mode, and lamp life is 2000 hours. Theater mode reduces lumen output by about 20%, increases lamp life to 2500 hours, and quite noticeably reduces fan noise.

The HC2 has the best video we've yet seen on a standard SVGA resolution LCD projector. Contrast and color saturation is higher than competing units in its class. While other SVGA LCD products are rated at 400:1 contrast, the HC2's 600:1 rating stands alone, and it is obvious on the screen. Furthermore, at a viewing distance of 2x the screen width, there is no pixel grid or screendoor effect of any consequence. You will see some pixelation in credits and subtitles, but it is virtually absent in the video image itself.

We had the best luck with DVD fed via component 525p (480p) into the VGA port. To hook up a DVD player with this connection, you can use a 3-RCA component video cable along with the component-to-VGA adapter that comes standard with the unit. The picture quality with this connection was surprisingly stable and clean. Shadow detail is lacking in dark scenes, but in this respect it is notably better than earlier generation LCD products. In high contrast scenes color is rich and vivid, and blacks are solid.

With HDTV, we again found the performance to be better than expected. Of course if HDTV performance is a serious concern of yours, choosing an SVGA resolution projector is not the right thing to do-there simply are not enough pixels to render an HD signal with the detail that you'd want. However, having said that, the HC2 is capable of delivering an HDTV picture that is clearly superior to DVD. We noticed an occasional momentary tearing of the image when the camera was panning horizontally. But for the most part video does not consist of horizontal panning, and this artifact did not manifest itself frequently. We watched an NFL game in HDTV 1080i on the HC2 with quite satisfying results considering the resolution and cost of the unit.

In terms of 4:3 format video games and computer presentation use, the HC2 renders a very sharp, color rich image. It is an ideal tool for PowerPoint presentations featuring charts, graphs, and bullet items. However, if most of your presentation material consists of detailed financial spreadsheets, Word documents, and other more detailed material, you will get better results using a native XGA projector and matching it with XGA output from your computer.

Overall the HC2 is a well-designed SVGA projector that is loaded with a variety of performance features. Our only reservation about it is the advertised price, which at this writing is $1,799. At this price, those looking for a dedicated home entertainment projector might want to consider the Panasonic PT-L300U, which is a higher resolution widescreen unit for the same money.

On the other hand, if you have a need for a combination business presentation and home entertainment unit, you might also want to consider the InFocus LP250. This doesn't have the contrast of the HC2, but is an XGA resolution LCD projector with a list price of $1899. For detailed presentation work it would be a better option.

These comparisons illustrate the issue. The Mitsubishi HC2 is an impressive, well-designed projector, but at $1,799 the advertised price is far higher than it should be. On the other hand the HC2's performance is head-and-shoulders above the SVGA units selling at $999. At $1300 it would be a terrific value in today's market. Given that dealers often sell below advertised prices, we'd suggest getting a price quote from a Mitsubishi dealer before letting the advertised price scare you off.