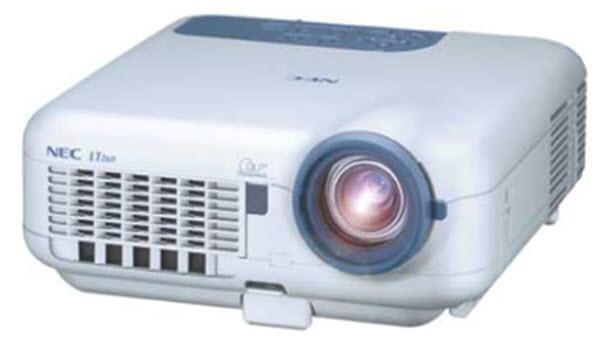 The NEC LT240K: Upgraded and Hotter than Ever

NEC announced this week that it has upgraded the popular LT240; the new edition is known as the LT240K. This move puts this unit back in the spotlight. It is a commercial variation of the HT1000. Though it is built for the commercial marketplace, it delivers superb video and is thus one of the leading products in the "crossover" trend, which refers to products designed for commercial use that also work extremely well as home theater machines. Many home theater enthusiasts will want to use the LT240K as a dedicated home theater projector due to its exceptional image quality and low price.

The LT240K is released along with the brighter LT260K, which is the upgraded version of the LT260. The LT240K and LT260K are in fact the same projector internally. The only difference between them is that the LT260K has a brighter lens which gets more light onto the screen. That accounts for its higher ANSI lumen rating. The LT260K's lens also has a longer throw distance for a given image size. So the model that is most appropriate for you will depend upon your throw distance restrictions and ambient light considerations. This review focuses on the LT240K, which due to its shorter throw, lower cost, and ample light output will be the unit most preferred for home theater users.

The LT240K is a DLP-based product using Texas Instruments' high contrast, 12 degree DDR DMD chip. It is native 4:3 format XGA resolution, and has been upgraded from an original 1300:1 contrast ratio to its current 2000:1 rating. Brightness has also been increased from the original 1600 ANSI lumens to 2000 lumens on the new model. It has an eco-mode which drops lumen output by about 20%, and drops fan noise from an already fairly low level to a virtual whisper.

The light engine features a four-segment RGBW color wheel that rotates at 120 Hz, commonly referred to as a "2x" rotation speed. All of NEC's LT series projectors use this wheel. The RGBW color wheel produces higher light output than the six-segment RGB-RGB color wheel used in the HT1000. (By the way, the HT1000's wheel also rotates at 120Hz or "2x", but because each rotation of the wheel delivers two complete RGB refresh cycles, this implementation is commonly referred to as a "4x" speed wheel.)

The optical system is environmentally sealed, which means that it will operate well without being affected by the presence of smoke and dust. Few projectors in this price range have this feature.

Connection panel inputs include two VGA 15-pin D-subs for RGB and component video, one composite jack, one S-video port, a USB Type A, a USB Type B, and two audio inputs, one for the video jacks and one for the VGA ports. There is also a monitor loop-through port, and audio out. For those who want to load presentation material onto the projector itself and be free of the laptop, a PCMCIA PC card slot is provided.

NEC has given you the ability to tweak to your heart's content. In addition to preprogrammed color temperature and gamma settings for presentation, graphics, video, movies, and so on, there are four user programmable settings as well. You have the ability to adjust gamma, perform color correction via independent red, green, blue, cyan, magenta, and yellow controls, set color temperature from 5000 to 10,000 degrees at preset increments. (One small complaint--there is no preset increment between 5000 and 6500 degrees. Classic B/W films are ideally viewed at 5400 degrees rather than the NTSC standard of 6500 degrees. But you can't quite get there with the preset options on this projector, and 5000 degrees is a bit too warm.)

In terms of throw distances, if you have a small projection room the LT240K offers more flexibility. It will throw a 100" diagonal 4:3 image from a distance of between 10.25 to 12.3 feet lens to screen. The LT260K needs to be moved back to between 13 and 16 feet to produce the same 100" diagonal image. If you are installing it yourself, make sure to allow plenty of space around the unit for heat dissipation (this is true of any projector). Also plan an extra six inches behind the projector for cable connection since that is where the connection panel is.

This projector is native 4:3 format and it should be matched with a 4:3 screen if you want to avoid cropping 4:3 material. Meanwhile 16:9 HDTV and movies will be displayed with black bars top and bottom. This is the ideal set up for many folks, and there are certain unique advantages to this over a 16:9 screen and projector. If you aren't sure which set-up fits your needs, read Your Biggest Decision: 4:3 or 16:9? before deciding on any projector/screen combination.

NEC has turned an already superb projector into a great one with the LT240K. The contrast is now leading edge, and the projector delivers solid black levels and ample contrast to produce a thoroughly satisfying and well-balanced image. Though the use of an RGBW color wheel reduces color saturation somewhat, the contrast performance of the DLP chip makes up for some of the loss. The net result is that color saturation, while not as deep as it is on the HT1000 and other DLP projectors with six-segment RGB-RGB wheels, is quite sufficient. Unless you have a projector with higher color saturation running next to it, most viewers would not notice any deficiency at all in the depth of color.

The LT240K has a new lens with the same physical properties but improved optical performance. With this upgrade the projector now delivers the sharpest XGA resolution DLP image we've yet seen. In data mode, the picture is razor sharp and equal to the the finest LCD products in this aspect of performance. That is saying quite a lot, since we've never seen a DLP projector that could match an LCD for sharpness in the rendering of a computer image (assuming the same resolutions of course).

The color decoding has minor errors, but none that cause visibly erroneous representations on the screen. Flesh tones are entirely natural. Reds are fairly close to ideal reds with little of the irritating orange bias that is found in many competing units.

Deinterlacing is better than the average for today's commercial projectors. However for the best video performance the internal deinterlacer can be bypassed by using 480p input, resulting in a very sharp, clean image. As with most projectors, the composite video input is the least satisfying of the inputs and should be avoided due to the limitations of the signal itself. S-video is the next step up, but should also be avoided if you have a component video source available.

Progressive scan input from DVD produced the stunning, sharp, beautifully scaled image that we were ultimately hoping to find. With good progressive scan DVD players selling for under $300 these days, there is no excuse not to feed this projector a video source of at least this quality.

Since the LT240K has a 4-segment, 2x speed color wheel, a word needs to be said about the "rainbow" artifacts that some people can detect. This can occur due to the sequential updating of red, green, and blue as the color wheel spins, such that you see a breakout of red, blue, and green on the screen. Dealers on this site report a very low return rate for NEC's DLP projector products, so the percentage of people thought to be sensitive to rainbow artifacts on them is small.

However, some people are particularly sensitive to rainbow artifacts. For those unfortunate folks, DLP projectors with 2x speed color wheels are not the right solution. They should consider either LCD or LCOS products that have no color wheels, or a higher performance DLP projector with higher speed wheel like the NEC HT1000. This usually eliminates the problem.

If you don't know if you are one of the few who may be sensitive to rainbows, it is an easy problem to solve. Several NEC dealers on this site will let you try the LT240K for a limited time, and return it if you have a problem. Seek them out and understand their returns/upgrades/exchanges policies before buying. The best dealers will take the worry out of the decision for you.

Overall, with the performance improvements and a price now well below $3,000, we can affirm that the LT240K produces exceptional video performance for the money. It is the quintessential crossover product. It is an outstanding performer for business presentation use, and it also earns its place on our list of Highly Recommended Home Theater Projectors.

For more detailed specifications and connections, check out our NEC LT240K projector page.