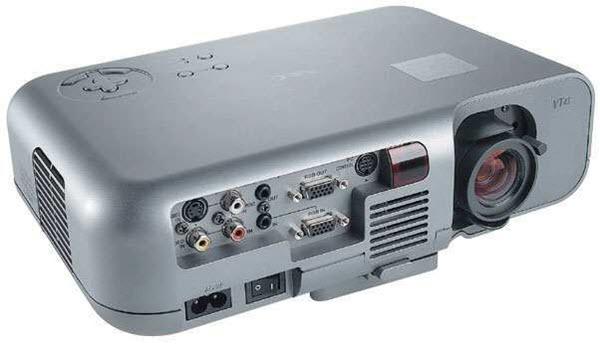 If you haven't looked lately, you will be amazed at what you can get for under $2,000 these days. For starters you can get 1000 ANSI lumens SVGA machine in a portable 5.6 lb package. But believe it or not, you can also get full HDTV, 480p, and component video capability, the ability to display up to an SXGA signal, manual horizontal and vertical lens shift, monitor loop-through, on-board audio, and a remote control that doubles as a remote computer mouse at the click of a button. You can find it all in the NEC VT45.

NEC Technologies has emerged as one of the most innovative makers of digital projectors in the market today. The company offers a broad line of products, from 3 lb. mini-projectors to large venue high definition commercial theater systems. But though the breadth of the product line is noteworthy, it is NEC's tendency to push the limits of what is possible in digital projection that is truly impressive. Nowhere is this more apparent than in the release of the VT45.

Lens. The VT45 has a manual zoom/focus lens with a zoom factor of 1.1x. So in practical terms, you can only adjust the image size up to 10% from minimum to maximum. That's enough to make a small adjustment to fit a screen, but major image size adjustments need to be accomplished by moving the projector. It throws a 60" diagonal image from a distance of about 8 feet, and a 100" diagonal image from about 12.5 feet.

However, the unique thing about the VT45's lens is that it can be moved horizontally or vertically, giving the user much greater flexibility in placing the image on the wall. To our knowledge, this is the first implementation of physical lens shift on a portable projector. As lens shift goes it is a rather coarse adjustment and you need to play with it a while to get the hang of what it can do for you. But once you get a feel for it, it gives you some additional flexibility for quick set up of the projector in new venues.

Compatibility. The VT45 takes all of the common HDTV formats (1080i, 720p, 480p, 480i) and component video, as well as standard composite and S-video. It even carries an FCC Class B certification (relatively rare in the world of commercial digital projectors), which makes it legal for sale as a residential/home theater device. As far as computer signals go, the VT45 takes SVGA native, and compresses both XGA and SXGA.

Image control. The VT45 has the most extensive set of controls for fine-tuning the image of any projector in its class. There are three different user-selectable gamma settings, full control of white balance, a variety of options for color temperature, and eight different video aspect ratio options for the display of standard 4:3, letterbox, and anamorphic DVD.

The VT45 is a native SVGA machine, which means it performs its best when you feed it an SVGA signal. And with an SVGA signal the VT45 performs admirably. The image is crisp and clear, very adequate for the presentation of text, spreadsheets, and graphics as well as Powerpoint slides.

As is true with every other SVGA projector we've seen, you need to be selective in the use of XGA, and in this case SXGA, sources. Once you go to an XGA source, you get more information on the screen certainly, but the compression algorithms and the limitations of the SVGA resolution do not allow for a crisp presentation of details. Powerpoint slides can be presented with no problem in XGA. But detailed material such as text and spreadsheets, while easy to read for a short period of time, are rendered with slightly fuzzed characters that produce eyestrain if viewed for any length of time.

Though the VT45 will take an SXGA source, it is not intended to be used regularly with this type of source, and it is not recommended. The details of an SXGA image simply cannot be mapped into an 800x600 matrix without substantial loss of clarity. This is not a fault of the VT45, but rather simply a recognition of the technical limitations of all SVGA-resolution machines.

Unfortunately, keystone correction requires compression of the image, which means that the details get fuzzy, just like they do with XGA or SXGA compression. Your audience will usually prefer to see clear, razor sharp text in a trapezoidal image rather than somewhat fuzzy text framed a perfect rectangle.

Once again, this is not a fault specifically of the VT45, but rather a problem common to almost all SVGA projectors. Vendors include keystone correction on these products because it is necessary for marketing reasons. But our advice is universally this: leave the keystone set to zero and either project at a 90-degree angle or live with the trapezoid.

In point of fact, the unique lens shift feature on the VT45 is a much better alternative to keystone correction. By shifting the lens upward, you can raise the entire image on the screen by up to 50% of the image height without compromising the rectilinear shape of the image. On other projectors, in order to raise the image you would need to tilt the projector upwards, thereby creating the trapezoid.

The VT45's lamp economy mode is well worth noting. The human eye can barely detect the difference between 1000 and 800 ANSI lumens. Shifting the VT45 from Normal to Eco 1 mode reduces the light output from 1000 to 800 lumens, but you have to pay very close attention to notice the difference. Meanwhile, setting the VT45 in Eco 1 mode increases the lamp life from 1000 to 1500 hours. Many users will want to opt for Eco 1 or Eco 2 (700 lumen) modes once they see the marginal difference in perceptible light.

As far as video goes, very few (if any) projectors in this price range offer full HDTV compatibility, 480p, and component video inputs. In point of fact, the video performance and flexibility on the VT45 is markedly superior to anything else we've seen in the under $2,000 price class-we'd even say that it is amazing for the money.

Thus the inevitable question-would we recommend the VT45 for home theater? At this writing, the answer would be yes IF your maximum budget limit for a projector is $2,000. However, we should point out that an economy budget means you will make compromises in image quality. Most notably, the VT45's contrast ratio of 300:1 is on the low side for home theater machines. Blacks are not as black as you would want, and shadow details get muddled somewhat. Furthermore, LCD technology in SVGA resolution produces a visible pixelation in the image that many people would prefer to avoid.

By comparison, the NEC LT150 at the moment sells on the street for around $2500. That machine has an 800:1 contrast ratio and native XGA resolution-the video performance of the LT150 is far superior to that produced by the VT45. Thus for home theater buyers who can swing the additional $500, we would steer you in that direction today.

The NEC VT45 establishes a new benchmark for performance and value under $2,000. It is a uniquely feature-rich projector for those on a limited budget. It is an excellent solution for classrooms and small conference rooms, mobile presenters, and even first-time home theater buyers with limited funds. If you are on a very tight budget and looking for the best possible deal under $2,000, we are happy to recommend the NEC VT45.

Specs, photo, and dealers for the VT45

For more detailed specifications and connections, check out our NEC VT45 projector page.