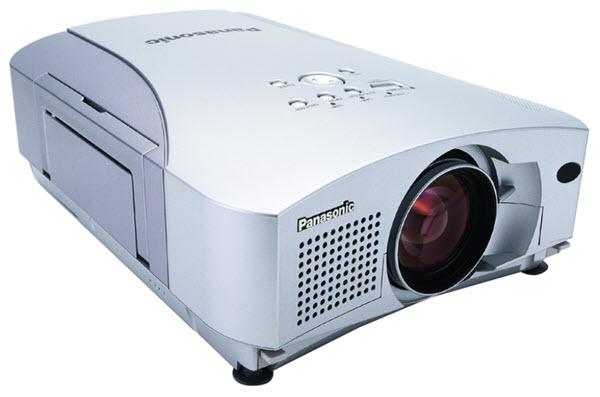 The ubiquitous Panasonic brand means a lot of things to a lot of people. It appears on an immense array of professional and consumer goods from broadcast production equipment to televisions to camcorders to nose-hair clippers. But in the world of digital home theater projectors the Panasonic name is increasingly synonymous with great video. The new PT-L720U is their latest offering, and one that will continue to build the tradition.

Panasonic's commercial digital projectors began to gather somewhat of a cult following among home theater enthusiasts with the release of two popular XGA-resolution models, the PT-L701XU and PT-L711XU. These units featured excellent color, overall superb video performance for the money, with the added benefits of virtually silent operation and a 4000 hour lamp life when used in low power mode. Though these models have been discontinued, at the moment some units remain available in dealer inventories at radically reduced prices representing some great buy opportunities (click either model for details). Building on the enthusiasm generated by the L701 and L711, and following the tradition of delivering great value for the money, new PT-L720U is sure to gain its share of extremely satisfied users.

The L720 is a native 4:3 XGA-resolution projector featuring three 0.9" LCD panels and a 220 watt UHM lamp that pumps out a bright 2200 ANSI lumens. Contrast is rated at 400:1. This is a native 4:3 machine that is 16:9 compatible, which means that it will accept a 16:9 format signal and display it with black bars at the top and bottom of the image on a 4:3 format screen.

The L720 has a 1.3x manual zoom/focus lens with a slightly shorter than average throw distance, allowing it to be placed in viewing rooms of modest size. A 100" diagonal 4:3 screen can be filled from a distance of 10'2" to 12'9" from lens to screen. Allowing a foot for the length of the projector itself plus another 2 feet for heat dissipation from the rear fan exhaust, and a 100" diagonal image can be managed comfortably in a room as little as 14 feet deep.

The primary inputs on the connection panel are two 15-pin D-sub VGA ports, the second of which can also be used as RGB-out monitor loop through if you needed it. These inputs will accommodate all of the higher performance component signal formats, including 1080i, 720p, 480p, and 480i. An S-video port and composite RCA jack are also available, as well as a 9-pin D-sub RS-232 serial connector. This projector is compatible with NTSC, NTSC 4.43, PAL, PAL-M, PAL-N, PAL60, and SECAM.

Although the L720 is rated at 2200 ANSI lumens, we do not recommend operating it in this mode for home theater. At this level of light output, not only is fan noise excessive, but color saturation, contrast and black levels are all compromised. However. Put the L720 into "low power" mode, and it is a whole different projector. Lumen output drops by about 20%, making it highly versatile for most home theater environments. Color saturation, contrast, and black levels improve dramatically. Fan noise drops from loud to relatively quiet and comfortably unobtrusive, even if it is sitting on a coffee table right in front of you. The coffee table is not where you want to put this projector however. There is a reasonable amount of light emerging from the rear exhaust vent that is distracting if placed in your field of vision between you and the screen.

As with other Panasonic projectors, one of the L720's strongest performance factors is its color accuracy and saturation. The picture is rich and natural looking. Grass on a football field looks green and natural without erring toward the excessive screaming green that is seen on many LCD projectors. Flesh tones appear comfortably genuine. And reds are red, and oranges are orange—a major hurdle that many competing units cannot negotiate.

Black level is surprisingly good, quite sufficient and much improved over earlier models. The 400:1 contrast rating would lead you to believe that contrast performance is relatively weak, and indeed it is the weakest aspect of the unit's overall image quality. However, in dark scenes we found very close to the same separation of shadow detail as we did on the Epson TW100 which is rated at 600:1.

When people think of LCD technology, the issue of pixelation (the screendoor effect) always comes to mind. This is a standard XGA resolution machine, so some pixelation is expected. However, we pleasantly discovered that, though there is a slight screendoor effect from a viewing distance of 1.75 times the screen width, it is more subtle than earlier generation XGA products. At times it is not visible at all, but it can be detected most readily in text and subtitles. And if it bothers you, you can use the technique of ever-so-slightly defocusing the lens to render pixelation a non-issue.

The L720's remote is reasonably functional, but not of our favorite design. The wobbling disc used to control cursor movement on the menu is a bit imprecise, and it is easy to overrun the target. Once you get the hang of it, it becomes less of a source of irritation.

The menu is not particularly elegant visually, but it is clean and straightforward, clearly designed for commercial rather than consumer use. Some of the functions frequently used in home theater, such as aspect ratio control and switching the color space from RGB to component, are buried too deep. But thankfully the system remembers the last use of the cursor and returns the user to that place in the menu, thus saving a lot of sequential clicks over time.

The ideal screen match for this projector is the Stewart Firehawk. This is the screen that is able to compensate most effectively for the projector's relative weakness in contrast. Other gray (high contrast) screens will work as well, but if you can fit it into your budget, the Firehawk is the ultimate solution. Its 1.35 gain is not too hot for the L720 assuming it is being used in the low power mode as recommended.

The most significant competitive rival to the Panasonic L720 is the Sharp PG-M20X. Thus a comparison is in order. This is not a question of which one is better however. They are both fine machines, and each has strengths that are the other's weakness. The question then is which is right for you? Hopefully putting a spotlight on the key differences between them will give you some guidance.

The L720 outperforms the M20X in several areas. First, it offers superior color accuracy. The M20X has a weakness in the red channel that does not exist on the L720. Objects which you know from experience to be red will have an orangish bias that can be distracting at times on the M20X, but they will appear red on the L720. Second, when placed into its preferred "low power" mode, the fan noise on the L720 is not nearly as noticeable as it is on the M20X. Third, the L720's two RGB/component inputs provide much more flexibility in running signals into the unit. The Sharp has only one input for all DVI, RGB, and component signals.

Conversely, the M20X has its advantages as well. First among them is that overall the picture is a bit smoother and sharper. It is absolutely pixel free due to its DLP technology, so there is no hint of a screendoor effect whatsoever. Second, the M20X is higher in contrast, which gives it the ability to open up shadows and render a more satisfying display of low-light scenes. Third, its remote and menu interface is more consumer friendly. Fourth, it has some DVI compatibility, whereas the L720 does not. Finally, if price is a consideration (when is it not?), the M20X is aggressively priced and (at this moment) is selling for several hundred less than the L720.

Ultimately both of these projectors are capable of delivering exciting and dramatic large-screen home theater at great prices. Both will have their strong advocates in the marketplace. Weigh the factors above, figure out what is most important to you, and go with the product that makes the most sense. You will not be wrong.

There are many folks out there calling attention to the dynamic video performance of Panasonic projectors. The PT-L720U will give avid fans a reason to cheer. Combining XGA resolution with a much reduced screendoor effect, outstanding rich color performance, solid black levels, and a street price tag under $3,500, this one is destined to be another one of Panasonic's winners.

For more detailed specifications and connections, check out our Panasonic PT-L720U projector page.