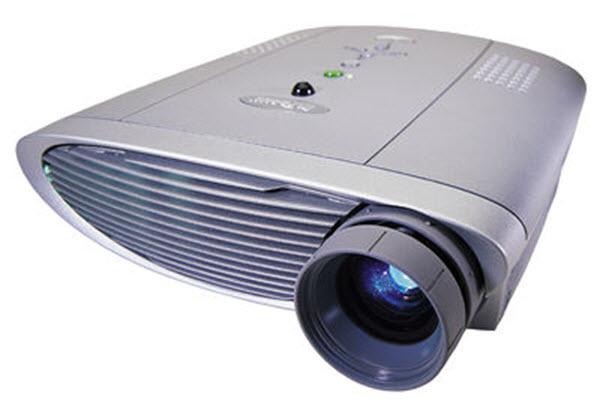 Seems like every new DLP projector with a decent contrast ratio catches the attention of home theater enthusiasts these days. Add the words "Faroudja delinterlacing" onto the spec sheet, and the market is even more interested. But bring the retail price in below $5,000 and suddenly home theater buyers everywhere are feverish in anticipation.

That's what we have with the InFocus Screenplay 110. Initially released as the LS110 and quickly renamed, the Screenplay 110 is the first serious attempt by commercial projector-maker InFocus to create a product specifically for the home theater market.

We first saw this projector at CES in Las Vegas a few weeks ago and the demo looked great. We could hardly wait to get one into the lab for a closer look. We've had it in-house for the last week now, and we are able to give you a more thorough assessment.

The Screenplay 110 is built on the same physical chassis as the InFocus LP530, which is an XGA-resolution commercial presentation product. They look identical from the outside. But that is about where the similarities end. Inside, the Screenplay 110 features the new 848 x 600 "dual mode" DLP chip from Texas Instruments, instead of the XGA chip. The 848 x 600 resolution chip is called "dual mode" because it will handle 16:9 video material in a native widescreen 848 x 480 format, and 4:3 material in 800 x 600 format.

The big advantage of the 848 x 600 resolution is that there is no scaling required for the 480-line widescreen material that you get from a DVD. No scaling means no scaling artifacts, and no softening of the image in the scaling process. The result, quite obvious on the screen, is that the Screenplay 110 delivers a very clear, razor sharp picture.

This projector has a brightness rating of 1000 ANSI lumens and contrast of 600:1. Thus it is intended for use in a home theater setting in which ambient light is controlled and the viewing room is dark. It is HDTV 1080i and 720p compatible. Unlike many InFocus products, this one will also accept 480p from an external line doubler or progressive scan DVD player.

The Screenplay 110 has a 4x speed color wheel that virtually eliminates the motion color artifacts (rainbow effect) that many users have found irritating on earlier DLP projectors.

The 220-watt lamp has a life of 2000 hours, which is an improvement over many DLP-based products that have 1000-hour lamps. Audible fan noise is noticeable if you listen for it, but it is low in pitch and easy to become unconscious of even with the unit sitting on a shelf directly behind your head.

The strength of the Screenplay 110 is the beautifully sharp, stable widescreen picture that derives from the fundamental advantage of not having to scale or compress the video signal to maintain the 16:9 format. On a standard SVGA 800 x 600 projector, the 480 lines of 16:9 video on the DVD must be compressed into 450 lines of the display. Or in the case of an XGA (1024 x 768) resolution product, the 16:9 image must be scaled up to 576 lines. While compression and scaling have gotten much better than they used to be, the ability to paint the video signal onto the display in its native 480-line format yields an image that is unrivaled in clarity. Friends and neighbors will be blown away by the resolution of the Screenplay 110's image.

Contrast, at 600:1, is not quite as high as we've seen on other DLP projectors in the past year. But it is a definite step up in performance compared to the mass of LCD projectors that come in around 400:1. Nevertheless, one of the several high-contrast gray screens currently available from Stewart, Da-lite, Vu-tec, and Draper are definitely recommended as companions to this unit.

DLP technology is famous for reducing pixel visibility and largely eliminating the "screendoor effect" that is a problem with LCD projectors, particularly in SVGA-class machines. On the Screenplay 110, at a reasonable viewing distance, there is no screendoor effect at all in the video image. However, one will notice pixel structure in text-opening and closing credits, subtitles, and so forth. If you sit too close to the screen, pixels become visible in the image as well. The ideal viewing distance for this projector is double the screen width.

Speaking of screens, this should be treated as a native 16:9 projector that requires a 16:9 format screen for best results. Forget about running 4:3 in the 800 x 600 pixel matrix. It should be run in 640 x 480, which basically sets the 4:3 image in the center of the 16:9 screen. The advantage once again is that the picture is displayed without any scaling, as 640 x 480 is the native format for NTSC.

There is room for improvement on the Screenplay 110, but mostly in non-image related areas. For example, the evaluaton unit we had would not respond to the remote when bouncing it off the screen. We had to point the remote at the projector itself to get a response, and we had to be within about 8 feet of the projector before getting a reliable IR connection that caused the projector to respond to every click on the remote. Furthermore the front IR sensor is on top of the unit, not on the front bezel. So mounting the projector behind a rear projection wall or putting it in a hush box on the ceiling is not advised if you intend to control it via the remote. Fortunately, fan noise is not bothersome enough to require this kind of set up to defeat it.

The Screenplay 110 is rather slow to recognize a change in signal format. The good news is that it will eventually figure it out automatically. But if you switch from 480p to 480i for example, it can take 30 seconds or longer to recognize the new signal and synch on it.

One final observation is that there is an unfortunate amount of extraneous light that emerges from the front exhaust grill. If there is any single indicator that this product is designed by a commercial manufacturer, light leakage from the front of the unit is it. No high-end home theater brand would allow this on their products, and InFocus designers would do well to take a cue from them in this regard. The problem is that extraneous scattered light in the viewing room will tend to reduce contrast performance on the screen. If you cap the lens and move your hand in front of the grill, you can see the base level of black change on the screen. This should not happen.

However, having said that, we must put this in perspective. First, the light leakage is not as bad as it was on the LP350 and LP340. Second, the new high-contrast gray screens tend to mitigate the effect. So ultimately the impact on contrast is subtle. Nevertheless, since contrast is all-important, anything that tends to work against the attainment of maximum contrast performance is undesirable.

With respect to the PLUS Piano, the Screenplay 110 offers a substantial edge in light output (1000 vs. 450 ANSI lumens), so it is capable of illuminating a larger screen. Due to its brightness it is also more tolerant of a small amount of ambient light, though we would recommend avoiding it if possible. The Screenplay 110 is HDTV and 480p compatibility, whereas the Piano is not. And a good HDTV source on the Screenplay 110 looks amazingly high definition despite the 480-line physical resolution. Therefore, for those willing to step up their investment to get HDTV capability and extra lumen output, the Screenplay 110 is a great alternative.

As far as the SIM2 HT200 DM is concerned, the basic performance specs between it and the Screenplay 110 are quite similar. Both are rated at 600:1 contrast with the same physical resolution on the chip. Both are HDTV and 480p compatible. The Screenplay 110 has a slight edge in brightness (1000 vs. 800 ANSI lumens).

In comparing the two, the HT200 DM is quite obviously a more polished home theater product. It offers a variety of features that the Screenplay 110 does not. Among them are a more elegant case design, power zoom and focus lens, more extensive connectivity, a lower wattage 6000 hour lamp, no light leaks, almost silent fan noise, and a more user-friendly menu system.

However, when it gets down to a comparison of image quality between the Screenplay 110 and the HT200 DM, there really isn't much of a difference. So in essence buyers who pay the additional $6,000 for the HT200 DM will be for the most part investing in additional convenience, the longer life lamp, the looks of the projector itself rather than the picture on the screen.

Its various flaws and idiosyncrasies notwithstanding, the ultimate measure of any projector is image quality. And overall, the Screenplay 110 is a pure joy to watch. All things considered it is an outstanding performer in the under $5,000 price class, and ProjectorCentral is pleased to give it an enthusiastic recommendation.

Specs, photo, and dealers for the Screenplay 110

For more detailed specifications and connections, check out our InFocus SP 110 projector page.