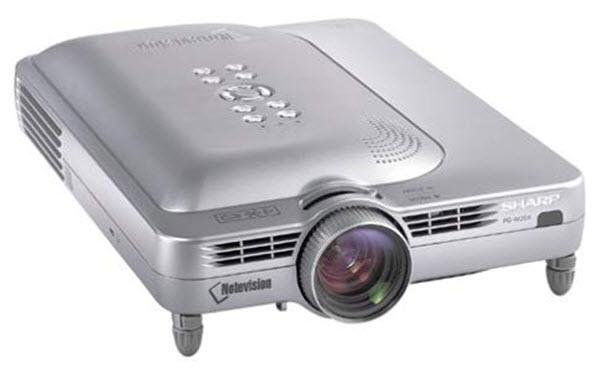 Though rapid advances in technology have become a matter of routine, when you see a product like the Sharp PG-M20X selling at street prices below $3,000, you just have to chuckle. Projectors just keep getting better and less expensive by the week. For many consumers, the PG-M20X will be the price/performance breakthrough product that will cause them to abandon last century's antiquated "box television" technology, and step up to their first full-blown front-projection home theater system. It certainly has its flaws like every other projector. But overall it delivers great value for the relatively meager investment—not much more than the cost of a decent digital television.

Sharp built the PG-M20X for the mobile presentation market. Accordingly it is compact and light (5.8 lbs), and designed to pump out a bright 1900 ANSI lumens. It uses a standard 4:3 format XGA resolution (1024x768) DLP chip, and doesn't have quite the connectivity you'd like. It also has on-board audio, which is useless. Typical commercial mobile projector, right? Wrong. Look a bit closer and you find that the PG-M20X features the new Double Data Rate DLP chip with 12 degree mirrors as well as a 3x speed color wheel. This light engine produces a smoother, higher contrast (1000:1) picture than earlier generation DLP-based products. It virtually eliminates the rainbow effect and flicker issues that have plagued some DLP users in the past. That by itself is a MAJOR step forward. Add to that some advanced deinterlacing and scaling capability, and suddenly you have the makings of a first rate home theater projector.

The PG-M20X takes RGB, component video, and DVI, all through a single DVI port. The balance of the small connection panel offers one S-video port, one composite RCA, one audio jack for on-board audio, and a USB port. So be aware--connecting a 3-RCA component video source like a DVD player is not straightforward. You need a 3-RCA to DVI cable, or a 3-RCA to 15-pin D-sub with a separate DVI to 15-pin D-sub adaptor, neither of which comes with the unit (order them from your dealer along with the unit). You can also use a standard S-video cable if you wish, but make that a temporary solution until you get the component input squared away. Component input produces the better picture.

The PG-M20X has a manual zoom and focus lens with a 1.2x zoom factor, typical for this class of projector. From a distance of 15 feet, it will throw an image that is between 76" and 91" wide. If you want to fill a 100" diagonal 16:9 screen with a 16:9 HDTV or widescreen image, the projector lens needs to be placed between 14 and 17 feet from the screen. So it is not a particularly short throw lens and you may have trouble situating it in a small viewing space.

The high pressure mercury lamp on board should be replaced every 1900 hours, or sooner if you see a degradation in color and picture quality. There is a "power save" operating mode that cuts light output by about 20%. Typically this would extend the lamp life, but the owner's manual is silent on this point so we will reserve comment.

Compared to other projectors in this class, the fan noise and pitch is moderate on the PG-M20X. It is loud enough that it may be distracting for some users, although it is not particularly shrill or overbearing. Once it is ceiling mounted and you get involved in a movie you will become unconscious of it except perhaps in very quiet scenes. Some may want to consider the use of a hush box to dampen the noise, but we would recommend living with it first to see how much of an issue it really is for you. You can always install sound damping materials after the fact if you find it bothersome.

Sharp always does a great job with remotes and menus, and the PG-M20X is no exception. Actually Sharp is one of the best at developing coherent, complete, and user friendly owner's manuals also. Most projector manufacturers in the industry could benefit by acquiring a Sharp product and studying the layout of the remotes, the menus, and the manuals. They would be learning from masters of the art.

The PG-M20X is capable of producing some amazingly high quality images, especially with 480i and 480p component inputs. With these inputs you can boost color intensity a bit and create some truly vibrant images. We watched Gladiator on both the JVC XV-D723GD and the Denon DVD-3800 DVD players, with both interlaced and progressive outputs. We did not find any significant deinterlacing artifacts when using the interlaced signals--the image was as stable, although not quite as sharp as the picture from the progressive signal. Scaling was precise, and the images were sharp and clear. (By the way, the difference in image quality between the JVC and the Denon was surprisingly minimal--nowhere near enough to justify the $900 price difference.) Contrast and black levels were both plenty sufficient to produce sparkling, extremely well balanced video, again with component inputs. Shadow detail was amazingly well defined, undoubtedly the best we've seen on any projector in this price range. Color accuracy left a bit to be desired however. There was the common tendency toward an orangish bias in the reds that we see on many projectors, and the red channel in general was a bit weak. But for a projector in this price range and considering the power of the overall image, this was in the grand scheme of things not much to complain about.

Though the projector has an S-video port, the difference in image quality between S-video and component is substantial. We do not recommend using either the S-video or composite inputs when quality video is the objective. This has as much to do with the limitations of the signals themselves however, as it does with the projector.

With HDTV we found the image to be slightly less robust than the 480i/480p component input due to softer color saturation. The sRGB setting rendered the most pleasing color balance. Shadow detail was again terrific, and the image was elegantly smooth due to great deinterlacing and scaling. The only thing lacking was the color vibrancy we were able to achieve with the component input. Nevertheless, the HDTV image was a pleasure to watch.

Sharp has produced a product that, considering its low street prices, can be considered a phenomenal achievement. It is an ideal entry level projector for serious home theater enthusiasts. We expect that it will hold a dominant share of the "under $3,000" market. Actually, we haven't yet seen a projector under $3,000 that can rival the performance of the PG-M20X. This projector is the first among the hundreds of models in this price range to produce a truly elegant high contrast image that is entirely free of pixelation as well as the dreaded DLP rainbow effect. Yes, we'd prefer a separate component input, a bit less fan noise, and better control over color. But then we'd have perfection, which no projector has yet achieved. For the money these limitations are extremely easy to live with.

So if you are planning your first home theater system, or simply want to upgrade that hulking big-screen TV, your money will be extremely well invested in the Sharp PG-M20X. We are happy to give it our strongest "buy" recommendation.

For more detailed specifications and connections, check out our Sharp PG-M20X projector page.