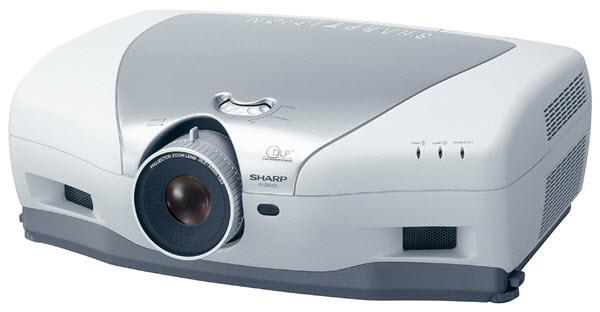 Sharp has taken a major step forward in digital projection price/performance with the release of the Sharpvision XV- Z9000U. It is a breakthrough product that sets a new benchmark for video quality at the $10,000 price point. Featuring the industry's first 16:9 widescreen format DLP chip, a sparkling 1100:1 contrast ratio, and extremely precise onboard scaling, the Z9000 is capable of delivering astounding film-like video images with virtual CRT quality.

The Z9000 is perhaps the first digital projector we've ever seen that is worth every penny of its full retail price (technically $10,995 in the press release, but effectively $9,999 as it is being advertised by Sharp's authorized dealers). That is a good thing because Sharp, like a number of other vendors who sell to the high-end home theater market, is distributing the Z9000 through a limited number of dealers and specialty retailers. So don't expect much discounting from the authorized resellers. (more on this below).

The Z9000 is obviously designed for ceiling-mounted home theater applications. In other words, despite the fact that you can hook your laptop to it, this is not a projector that can do double duty as a mobile presentation unit. At 21 lbs and with a 19"x18" footprint, it is relatively large and heavy as digital projectors go. That is great for stifling fan noise (the projector is almost silent in operation) but lousy for shlepping around town. So if you are looking for a multi-purpose machine, look elsewhere.

This projector has all of the image adjustment controls the videophile would want for optimization of the picture including gamma correction, color temperature adjustment, and independent controls for red, green, and blue contrast and brightness. A variety of aspect ratios can be accommodated.

The first remarkable thing about the Z9000 was that it was reasonably close to being optimally calibrated right out of the box. This is unique in our experience. With all controls set to factory pre-set the Z9000 produced a satisfying image with excellent color balance, black level, and contrast. This should help sales a great deal since it is being sold by dealers/retailers who have demo rooms, but who often do not have the expertise in house to calibrate projectors to optimum performance.

Nevertheless, with a few relatively small adjustments, the picture quality can be improved another notch. If you are going to invest in a product of this quality, we strongly urge you to pick up a copy of the DVD calibration disc The AVIA Guide to Home Theater. It has a variety of test patterns and instructions to help you get your video system tweaked up to a higher level of performance than you could achieve by eyeballing it.

The contrast performance of the Z9000 is exceptional. Its 1100:1 contrast rating is in rarified atmosphere in the world of digital projectors. Does this high rating translate to real performance on the screen you ask? All we can say is this: if you didn't know you were looking at a digital image, you'd probably assume you were viewing a fine CRT system.

Another remarkable feature of the Z9000 is its internal scaling, which is simply sensational--the best we've yet seen on a digital projector. And with the high resolution DLP chip, pixels are invisible. The combination of virtually artifact-free scaling and the invisibility of the pixels produced a smooth, seamless, well-integrated image that, again, one usually associates with high performance CRTs.

It goes without saying that the Z9000's widescreen 1280x720 format gives it a decided edge in HDTV resolution over competing projectors with standard 1024x768 DLP chips. In particular, ABC's 720p format is displayed in native resolution on the Z9000 for a picture that is unbeatable.

The Z9000 is, as noted above, a DLP machine. And some people have been sensitive to an artifact known as the DLP "rainbow" effect that can occur along the edge of objects in motion. The accelerated rotation of the 5x speed color wheel on the Z9000 is designed specifically to reduce the errors in rapid motion display that cause the rainbow effect. In practical terms, very few people will be able to detect any rainbow effect at all on this product. For those few that may be able to, it is not nearly as prevalent or obvious as it may have been on earlier generation machines.

In another review we stated that a $10,000 projector should have DVI input. The Z9000 does not. In theory the benefit of DVI is that it eliminates the need for D/A conversions and the jitter that is often produced by them. However, the stability of the Z9000's picture with high quality analog inputs is so good that you won't miss DVI for a minute. On this machine, the lack of DVI is a non-issue as long as you have high quality analog sources.

There is some bads news here, if you want to think of it that way. The bad news is that a projector that has the resolution power of the Z9000 demands top quality sources to produce a top quality image. Garbage in, garbage out was never more obviously true than it is on this projector. On lesser machines, scaling inaccuracies, resolution limitations, and pixelation serve to mask some of the deficiencies in television signals, DVD disc transfers, and DVD players themselves.

On the Z9000 the deficiencies of your sources will be glaringly obvious to you. Do not attempt to drive the Z9000 with a cheap DVD player and expect the projector to overcome the defects of the source. It won't, just like a Ferrari won't perform well on cheap gasoline. So if you are thinking of going with a Z9000, think also in terms of upgrading that old DVD player to something in the class of the Denon DVD-2800 or better.

Along this same line of thinking, contrary to popular belief "DVD" is not always synonymous with good picture quality. There is in fact a huge variation in the quality of DVD transfers, from the pristine to the virtually unwatchable. You won't notice this on a 27" television, but once you go to a Z9000 on a 100" screen, the wide variations in DVD disc quality will become painfully obvious. Therefore, you might want to get familiar with a publication called Widescreen Review. They do a terrific job of rating the video and audio quality of every DVD on the market. As distasteful as it sounds, the quality of a DVD's transfer may become an important criterion to you as you select your viewing material. If it does, Widescreen Review can help you sort them all out.

Well. Here is the situation. Sharp is distributing the Z9000 through a select number of authorized dealers/retailers. Typically these dealers/retailers have specifically assigned geographical territories in which they must conduct business. They cannot sell outside their territories, on the Internet or otherwise.

Buying through the gray market also increases the risk that the product you get will be damaged stock, demo stock, used equipment being sold as new, or sometimes even imported from other markets where compatibility might be an issue. Other than to alert you to the possible risks, we cannot advise you further in this regard.

ProjectorCentral's position is this: we do not knowingly allow unauthorized dealers to advertise or participate in any sale or bid activity on our site. We do this to reduce the risk that buyers will be victimized by unethical gray market tactics. We assume that the manufacturer has chosen its authorized dealers based on their viability, reputation, and ability to handle after sales service and support. Therefore, since Sharp currently prohibits their authorized Z9000 dealers from selling on the Internet, this model has been removed from the Get Bids! system. So please do not request bids on this product.

At this time the only way to buy a Sharpvision XV-Z9000 with a valid Sharp warranty in accordance with Sharp's distribution policies is to buy from a dealer authorized to sell you the product in your particular location. To find out who that dealer is, click "Dealers" on ProjectorCentral's left navigation bar, select "SharpVision" as the brand and enter your location. If there is no SharpVision dealer listed in your area, please call Sharp at 877-388- SHARP for further assistance.

For more detailed specifications and connections, check out our SharpVision XV-Z9000U projector page.