How to Watch TV

"What?!" you say indignantly. "I've been watching TV since the Indian Head test pattern was broadcast late-night in the 40's. I can operate the remote just fine, thank you, and I use my home theater primarily for movies. What else do I need to know?" 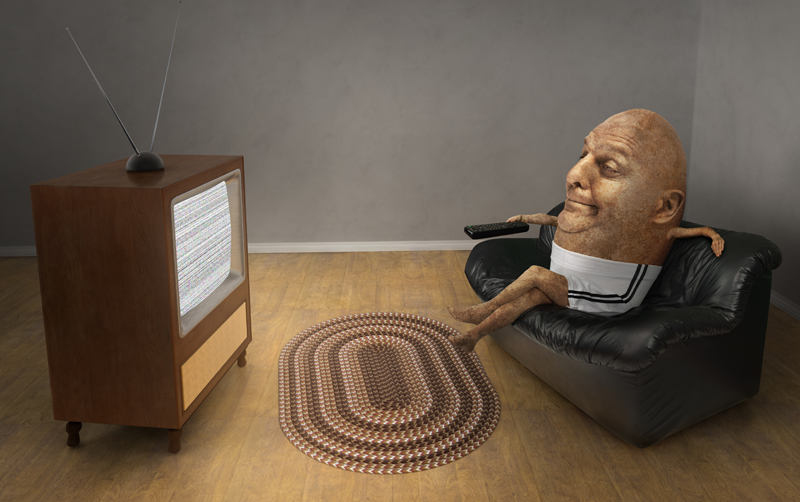 First of all, why should you even care about ol' plain-Jane TV? It ain't your grandfather's (or even your father's ... or even your older brother's) TV anymore. Indeed, the television experience has never been better. If you recently upgraded your theater to 4K/HDR, et. al., you would be doing yourself, your family, and your wallet a serious disservice if you didn't revisit at least some of the new program choices...but I'm getting ahead of myself.

With this season's new offerings recently hitting the air (okay, coming down the optical cable), it's a good time to make the case for optimal TV watching. Having a process helps. As in...

Step 1: Having a DVR is absolutely mandatory! Every broadband provider has one. Usually, if you have one, you can access it from all other monitors in the house. I expect the DVR and the traditional set-top box to be one, inseparable purchase soon, if we're not already there.

Step 2: Sample all the pilots of the new season. Often the titles are deceiving, so you have to get in there to really see what they're about. Select the ones that you want to see more of. The "delete" button is easy to find for the rest.

Step 3: An excellent use of the DVR is to record those favorites in "Record Series" mode. If you can stand the wait, collect three or four episodes in a row...and then find a time when you can binge watch them together. It feels like watching a movie in a commercial theaterâsans the cell phones and crying babies, and with the advantages of food runs and bathroom breaks at will (the "pause" button is also easy to find).

As far as I'm concerned the quality of primetime offerings are at an all-time high-water mark, rivaling many reasonably grossing commercial movies. A subtle side effect is that, for those who need to discuss last night's episode at the coffee shop the next day, the anticipation of next week's offering provides enjoyable discussions of what to expect with like-minded individuals.

The downside? My gripe with major network broadcasters (and hence, cable packagers) is the combining of multiple channels so that in order to get what you want, you have to sign-up for 300 "other" channels, bumping the monthly invoice to big number$. For me, though, the variety and quality are still worth it.

Yes, streaming content providers now offer slim, similar prime-time experiences to Joe Six-Pack, but not yet at attractive pricing. Apple recently reduced the price of their offerings, signaling the appeal of streaming video may be waning.

But before you leap on a good streaming deal, there's the issue of streaming's sub-standard video quality. That will be the subject of yet another column...

Comments (7) Post a Comment
Stuart Wecker Posted Oct 21, 2019 3:37 PM PST
I totally disagree that "the quality of primetime offerings are at an all-time high-water mark. To be honest - most standard broadcast tv channels offer very poor quality programming. Now compare to the offerings on : Netflix, Prime, MHz, Acorn, PBS. NOT EVEN CLOSE!!
Tod Posted Oct 22, 2019 8:21 AM PST
Pink Lady and Jeff, Super Train, The Huff and Puff Good Time Hour are just a few of the sadly missed PT shows at my house.
Lauren Posted Oct 24, 2019 12:17 PM PST
Or buy a decent antenna and just watch TV over the air (OTA) like we used to in the olden days. Save thousands of $ every year and the picture quality is better than anything on cable. Downside: limited selection. So buy a Roku, Chromecast, Apple TV, Kindle Fire, Nvidia Shield or other streaming device for $50 to $200-ish and get access to lots of content if you have home Internet, which everyone does. You can buy just what you want from numerous offerings like HBO, NFL, etc.
Chris Posted Oct 28, 2019 11:48 AM PST
I "cut the cord" so to speak years ago. Too much good-to-better content on streaming services compared to the traditional networks, and you can always do Hulu Live or something like that if you "need" to have live TV for sports or in place of basic cable.

I thought I couldn't live without cable... until I tried it. It was hard at first, like when I quit smoking cigarettes, but after a month or two the pangs for cable were fleeting, and after the first year, all I could do was look back and think about all the money I wasted on smoking, er, I mean, cable all those years...

I ditched cable for HD OTA + Windows Media Center DVR + Netflix DVDs probably 10 years ago. That was fun until internet speeds caught up and Netflix streaming took off (and Microsoft finally ditched Media Center). With the amount of content available to stream (and without commercials), I only see streaming channels a la carte for the next decade or more for me. No DVR, no 300+ channels when I really only need a handful. That's already more content than I'll ever watch.
Terry Paullin Posted Nov 8, 2019 12:52 PM PST
Hmmm ... Looks like I ruffled some feathers of a few in the cable-cutters flock. To be sure, there is nothing wrong in saving a few nickels here and there, especially if you are among the vast majority of U.S. households who don't place A/V quality at the top of their care-a-bouts ... and yet some 60+ million are still hanging on the the cord!!

But remember, the point of my column was that IF you flew with the other, smaller, group of birds who had invested significant $ in the best hardware currently available (4K/HDR/multi-channel audio) it would be a SHAME not to leverage that investment beyond just movies on disc. Don't be confused, prime time TV produced on the best production equipment will be hands-down better than streamed from the current array of providers.

A word about streaming. "Streaming" is NOT downloading. Streaming always suffers from bit loss, (algorithms that try to fool your brain into thinking you aren't missing something), frame rate inferiority (most streamers are at 30fps, while some cable guys are experimenting with 120fps), latency (due to bit blocking), and inadequate or non-existent surround sound. I'm also not aware of any of the current crop of streaming providers who are showing black financial figures .... will your favorite survive?

If you think (after a fair comparison of both) that streaming video is superior to prime-time cable, run, don't walk, to LensCrafters.
Terry Posted Dec 31, 2019 11:50 AM PST
Well Obie (and other streamers) you have mentioned the problem - content, cost thereof. When Mickey came on the seen recently he took about half of the stream customers with him. People, especially those with kids may be content with just the mouse's massive content offering - but recent studies have shown that the average "streamer" subscribes to 3.6 non--cable sources, Disney will no doubt take out the lessor stream sources. It costs big bucks to either develop original movies or acquire the exclusive rights to same. Only a small handful will surive and with fewer players, individual subscription price is almost certain to go up. Sooo ... if an average cable cutter is paying 4 or more sources to satisfy the entire families tastes, he/she is approaching what they used to pay for cable - minus a few inconveniences, like one call service. Smart money says restrain those scissors until we see how all this sorts out, The changes in content receipt wii be large - I promise!

B-T-W, you can easily blast through commercials on all current STBs