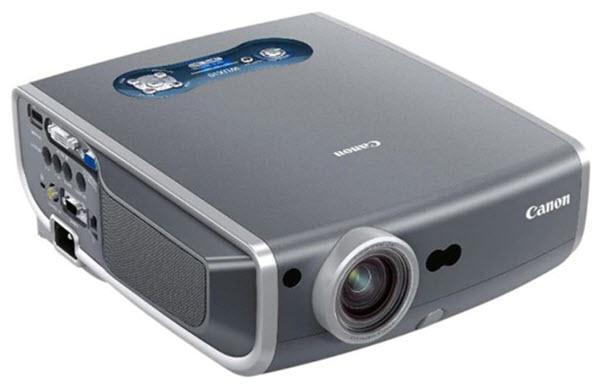 Canon has recently released their WUX10, which is a WUXGA - or 1920x1200 - LCoS projector. Essentially, this is the 16:10 format version of 1080p, and is a common resolution for large computer monitors. At the moment, projectors in this resolution are somewhat rare. There are only seven models available, and only two of them are under $10,000. Thus, the Canon WUX10 is rather unique in that it combines a very bright 3200 lumen output and a high resolution, widescreen format, in a portable package weighing only 10.8 lbs.

The WUX10 is a bright, razor sharp projector that's great for any sort of detailed material, from video to photographs to detailed technical illustrations. It is a great option for doctors or hospitals who need to give medical presentations using high-resolution graphics. It fits well in museums where digital artwork can be displayed. It can also serve well in command and control applications. While on-board audio capability is minimal and it has no lens shift, it is still a versatile, powerful projector that delivers sparking, brilliant graphics and video.

Bright picture. One of the Canon WUX10's key advantages is its high lumen output. Our test unit reached a maximum lumen output of 2860 ANSI lumens in "Presentation" mode, out of a specified 3200 lumens. This makes the WUX10 well-suited for use in for rooms with quite a bit of ambient light. And in a light-controlled room, the WUX10 is powerful enough to light almost any screen size you can imagine.

Very high resolution. Currently, WUXGA is one of the highest resolutions available in consumer projectors, with a native pixel matrix of 1920 horizontal and 1200 vertical pixels. There are higher resolution projectors available, called 4K, but they are in a different league price-wise, and they are not portable. WUXGA 1920x1200 resolution is commonly found on high-resolution monitors and graphics cards. Several laptops also support this resolution, so don't think that you need a top-of-the-line system to make full use of the WUX10. If you own a laptop made in the last two years, chances are good it will output a WUXGA signal.

The resolution of the WUX10 makes it ideal for the display of technical documents, complex graphics or detailed photographs. Photos from a digital SLR camera use the 2:3 aspect ratio, which means you can use almost all of the WUX10's impressive resolution - 1800x1200 pixels, to be exact. This is a nice increase over the 1620x1080 pixel matrix you'd be able to use on a 1080p projector, so photographers and museums that want to display visual arts in maximum detail and resolution will find this model appealing.

Sharp, clear image. The WUX10 maintains excellent sharpness of detail and overall image clarity. While LCOS projectors do not have the sharply-defined pixel structure of LCD projectors, this has the effect of making the picture appear smoother and more natural due to the smaller inter-pixel gap. The end result is a smooth, natural image that nonetheless retains every iota of detail present in the source material. 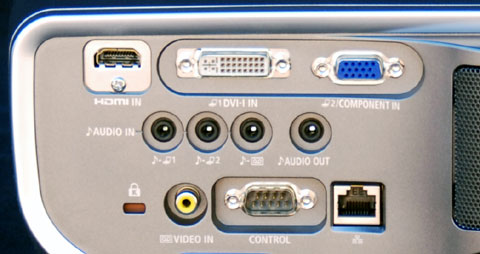 Good connectivity. The WUX10 has an HDMI port, a DVI port, and a VGA port - all three of which can handle a WUXGA signal. It also includes no fewer than three audio inputs, and it can of course receive audio over HDMI as well. While we were not impressed with the WUX10's onboard speaker, having separate audio inputs for each video input is a nice feature. It's just a shame that the speaker is so tinny.

Portable. In practical terms, the WUX10 is larger and heavier than most portable projectors. However, when you compare it to other WUXGA projectors, it is the third lightest - Digital Projection's iVision 30-WUXGA and projectiondesign's F10 are both lighter, but they are much pricier. This makes the WUX10 the smallest, lightest WUXGA projector which can be purchased for under $10,000. And just think - ten years, ago, a twenty-pound SVGA projector was considered "portable." If you need the outstanding high-resolution performance of the WUX10, eleven pounds is not unmanageable. The projector comes with its own carrying case and shoulder strap, so it is ready made for the road.

Powered zoom/focus with Auto Adjust. In terms of ease of use, powered zoom and focus stands head and shoulders above the manual variety, especially in a portable projector. However, Canon took things one step further by including Auto Adjust. With the push of a single button, the WUX10 will evaluate its surroundings and automatically adjust focus, keystone, and active input in a matter of seconds. When you have an audience waiting for you, seconds can count, and the WUX10 saves you quite a few of them.

The auto-keystone on the WUX10 works by evaluating the angle of the projector's body, not by "looking" at the screen - so if your projector is level but your screen is canted, you will get an accurate focus, but an inaccurate keystone adjustment.

Versatile zoom. The WUX10 has a 1.45:1 powered zoom lens, which is impressive for this class of projector. The added range allows the user some extra flexibility in placement when installing, or allows for a variety of image sizes at a given throw distance.

Great video performance. The WUX10 was not designed as a home theater projector, but it is a very capable video projector. Our testing showed it to be a solid performer when using 1080p/60 Blu-ray content. It is not spec'd to be compatible with a 1080p/24 signal, and if you feed it 24p you'll see quite a bit of frame tearing. But as discussed elsewhere on this site, 1080p/60 introduces less motion judder than 24p when displaying a 24 fps source like Blu-ray anyway. So the lack of 24p compatibility is not significant.

Moderate contrast. When we last talked about projectors for photography, we primarily spoke about 1080p home theater projectors due to their relatively low cost and high contrast. The WUX10 has a stated 1000:1 contrast ratio, which is quite low by home theater standards. However, in a room with low to moderate levels of ambient light, the WUX10's 3200 lumens are of primary importance, while its 1000:1 contrast almost ceases to matter. Since projectors cannot project black, but merely an absence of white, any light in the room destroys on-screen contrast ratios. High lumen output is the only thing that can create contrast in these situations, and the WUX10 has lumens to spare. For its intended purpose, the WUX10 has plenty of contrast sparkle. Believe it or not, when placed next to the Epson Home Cinema 6500UB (rated at 75,000:1 contrast), even low levels of ambient light in the room will make the Canon WUX10 appear to be the more brilliant and higher in contrast of the two projectors.

No lens shift. Lens shift makes it easier to set up a projector in difficult situations with which presenters sometimes have to cope. The WUX10 does not have lens shift, so you will need to take care to ensure that the projector is parallel to the screen and more or less centered horizontally. And while lens shift would have been useful on the WUX10, adding it may have increased the size, weight, and cost of the projector.

Weak onboard sound. The WUX10's audio performance is not commensurate with its video performance. The WUX10 has an onboard 1.0-watt mono speaker, which is usable in only one situation - when you are in a small room and don't need very good sound. If you have a need for anything other than minimal audio, plan to use an external audio system.

Canon's WUX10 is a fine example of a high-resolution data, graphics, and video projector. It puts out close to 3000 lumens and produces a clean, sharp image with plenty of pop. And it can even handle high definition film and video, if you want to take it home on the weekends.

Canon's WUX10 is quite an accomplishment. It is an easily portable, super high resolution projector that can handle almost any signal you throw in its direction without breaking a sweat. It gives a new, attractive option to medical presenters, photographers, engineers, architects, museums, professors, and a myriad of other people and organizations who need brightness, high resolution, and excellent color balance, all in a portable package. It is easy to give this one 5 stars for performance. We are giving it 4 stars for value only because there is less expensive competition out there in WUXGA resolution that offers more robust onboard audio and lens shift. However, it remains to be seen whether the competition can match the brilliance and balance of the image produced by the Canon WUXG10. As a follow up to this review, we will be doing a shoot-out between the Canon and its primary competitors.

Comments (2) Post a Comment
Tom Posted Feb 5, 2009 6:06 PM PST
Very good review. Thank you. I am wondering how noisy it is. Is there a db rating?
LeButler Posted Mar 2, 2009 2:15 AM PST
Could you include the Dell 7609WU in the forthcoming shoot-out please? The WUX10 is a little late to market - but does have some advantages over the cheaper Dell.