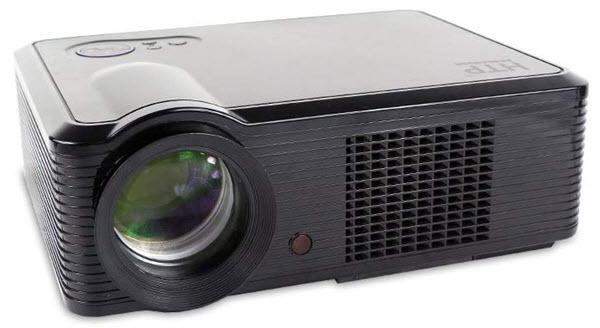 Finding a dirt cheap projector on Amazon or eBay is all too easy. It is much more difficult to find a cheap projector that performs anywhere near its stated capabilities and isn't riddled with bugs. The HTP LED-33, an 800x600 projector priced at $205, certainly qualifies as cheap, and it is free of any crippling bugs. But if you purchase this projector expecting a bright picture based on the 2000 lumen rating, you're in for a nasty surprise.

Picture is watchable. Aside from a sharpness control that is set far too high by factory default, the LED-33 can produce a surprisingly watchable picture. Bringing sharpness down to zero removes the ugly excessive edge enhancement, and switching color temperature from Medium to Warm removes the odd bluish cast of the default image settings. After these adjustments, the picture is smoother and has reasonable color.

HD Compatible. As with most of these cheap projectors, the seller of the HTP LED-33 goes to great pains to make it sound like a native HD machine. In reality, it is native SVGA, or 800x600, which is about a million and a half pixels short of 1080p. The projector is capable of displaying an HD signal, though it is downscaled to fit the native pixel matrix so you lose a lot of the HD detail. The LED-33 successfully displayed both 1080p/60 and 1080p/24 signals from our Oppo BDP-103 Blu-ray player. Unlike the Digital Galaxy DG-757, it also maintained the correct aspect ratio.

Onboard speakers. While there's no bass response worth mentioning, the LED-33's onboard speakers are capable of surprising volume. At maximum volume, the sound has a tinny distorted quality that is typical of small speakers, but the sound quality is decent for this class of projector and louder than the projector's competitors.

Some picture controls. The LED-33's menu system gives you control over brightness, contrast, sharpness, color saturation, and basic single-axis control over white balance. You can adjust the relative levels of red, green, and blue, but those adjustments are not separated into high and low.

Build quality. Compared to the Digital Galaxy DG-757, the LED-33 is built much more solidly. It is still flimsy and light compared to projectors built by the established full-line projector companies, but it is a cut above some of the other cheap junk out there.

Consistent focus. The LED-33 was capable of focusing the entire image edge to edge and top to bottom all at once. This seems like a given, but with these cheap projectors it isn't.

The LED-33 boasts a 20,000-hour lamp life, and there is no way to replace the lamp, so we assume that the projector is actually using LEDs. However, after considering the general build quality of the projector and the overall cheap feeling of the components, it is likely that something in the projector will fail well before you reach 20,000 hours of use. It may or may not be the lamp.

Low resolution. At only 800x600 pixels, the LED-33 shares the same resolution as the lowest-res products still made by most mainstream projector manufacturers. Those projectors are built for portable presentation and PowerPoint use, whereas this projector is marketed for home video. The low resolution leads to a serious loss of detail -- and detail is the main reason to watch HD content in the first place.

No zoom lens. Very few cheap projectors have zoom lenses. Even the major manufacturers often give their low-end projectors short zooms of 1.1x or 1.2x, because longer zoom lenses cost more money. But on the LED-33, there is no zoom range at all. To adjust picture size, move the projector towards or away from the screen.

We found this projector being sold as: "FULL black HD PROJECTOR 1080P 2000 LUMENS CONTRAST 1000:1 SUPPORTS HDMI,USB,DTV." So it's safe to say that the sellers intend it to be used for video, and that they hope you confuse it for a full HD projector.

It's not an HD projector, as should be obvious by now. It's also not even remotely close to 2,000 lumens. Citing a contrast spec of 1000:1 is also quite generous, as that would imply a black level that this projector just isn't capable of. With all that said, the LED-33 produces a surprisingly decent picture for something so cheap, and we'd say that it was the least disappointing of the three cheap projectors we looked at.

A Competitive Alternative: Epson VS230

Even with its low-ball price, the LED-33 cannot avoid competition from the larger manufacturers. The Epson VS230 is an SVGA projector priced at $360, or about $155 more than the LED-33. While the two projectors share SVGA resolution, they have very few other similarities. On the VS230, color is bright and well-saturated. Though it is not marketed as a video projector its video looks better than the LED-33; its contrast is higher, giving a better impression of three-dimensionality, and its brightness uniformity is far superior. The VS230 also lacks a zoom lens, but the focus knob moves more freely and fluidly than that of the LED-33. Not to mention, you get a one-year warranty from a well-established vendor with support facilities worldwide.

Most importantly, the VS230 is rated at 2800 lumens, and unlike the LED-33 it actually produces almost all of them. It is literally more than ten times brighter than the LED-33. This allows you to use the VS230 in rooms that aren't totally dark, and on larger screens than the LED-33 could possibly illuminate.

If Epson were to advertise the VS230 on Amazon in the same manner that HTP does, it could legitimately promote it as 3LCD, 300" diagonal, full HD 1080 720p compatible, Blu-ray, cable/satellite, PC, Mac, Wii, PlayStation 4, Xbox, onboard audio, HDMI, USB thumb drive picture presentations, all-in-one home theater entertainment video projector. Portable for backyard use. 2800 ANSI lumens, very high 10,000:1 contrast. That doesn't sound like a business projector, but it is.

In short, the HTP LED-33 is adequate for what it is: an inexpensive "toy" projector that produces a dim yet watchable picture. However, as attractive as these cheap projectors may appear to be, the major full-line manufacturers deliver much more robust products for not much more money. So check your options before buying.


Part of our series on Cheap Projectors:


For more detailed specifications and connections, check out our HTP LED-33+ projector page.

Comments (7) Post a Comment
AV_Integrated Posted Aug 3, 2014 5:15 PM PST
Bill - Love these reviews. I don't think those who are already putting these projectors in their basket are actually taking the time to read beyond a few Amazon reviews, but it's good to have this information out here.

I think your specs on the VS230 are incorrect... Could it advertise itself with over 10,000 lumens? I mean, if you are going to boldly lie, why not do so with gusto? :)

Any word back yet from the fine folks at CRE who are still boasting similar claims to many of these far lesser expensive models?
Ash Welch Posted Nov 12, 2014 12:31 PM PST
In response to AV_Integrated's comment, that hypothetical ad for the Epson reads 2800 ANSI lumens. 10,000:1 is the CONTRAST RATIO, quite average for a DLP projector! It's not an exaggeration or even a bold lie. Mr. Livolsi's specs are correct.
Luke Posted Dec 28, 2014 8:58 AM PST
All of Epson's Projectors are 3-LCD, not DLP.
Freddy Posted Jun 15, 2015 9:48 AM PST
Since i purchased this unit i found no problem and it has been running an average of 5 hrs daily for the past 4 yrs. However the firmware does not support many of the older codecs and has other minor bugs where it does not play complete movies of certain formats like mp4s. It runs smoothly then it stops at a specific time (say 1h18m) and there seems to be now way of going beyond that time frame. I been lookung to see if i could update the firmware in some way by downloading to usb, which seems to be a possibility since there is the option for firmware update in the menu, but i cant srem to find any original or unoriginal fixes and updates any where on the www. Is there anybody who can lend a tip or two on how to fix this bug ? Thanks.
Frederick Posted Nov 12, 2016 1:50 PM PST
I have been having the same problems trying to upgrade the firmware. There seems to be nothing official about these projectors on the www.

Did you manage to find a solution for this issue?
BAPCHURCH Posted Sep 29, 2017 7:23 AM PST
WHERE CAN I GET A REPLACEMENT PART TO PURCHASE FOR MY LED 33+ PROJECTOR...THE PROJECTOR WORKS PERFECTLY FOR ME,THE SOUND IS WORKING BUT THE MAIN PROBLEM IS THAT THE SCREEN LIGHT IS NOT SHOWING.....PLEASE ADVISE ME
Lisa Posted Feb 6, 2020 2:01 PM PST
I need a power cord for my projector... please advise... thx