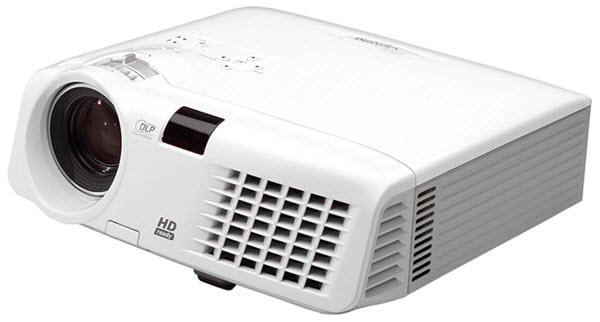 Have you been dreaming of the day when you could get a high contrast, 1280x720p resolution DLP home theater projector for just $999? Well, you can stop dreaming--with this week's release of the Optoma HD70, that dream is now a reality. With the HD70, Optoma continues to lead the industry in smashing through price barriers, as it is the first of the DarkChip2 720p projectors to go under $1,000. This is a truly exciting release. With HD 720p projection now available at such low prices, just about anyone can afford to watch this fall's football season in pure high definition. While small compromises have been made to deliver 720p DLP at this price, the HD70 is a solid projector that represents a major step forward in the quality of entry level home theater.

Connection Panel: One HDMI port, one sets of YPbPr component inputs, one VGA port, one S-Video port, one composite video port, one 12V trigger, one Kensington lock port, and one service port.

The HD70 has a high gloss white case, with gray trim on the sides and rear. It is not overly branded, with small "HD Ready" and "DLP" logos on the front and an Optoma badge up top. In all, it has a minimalist appearance that hides ann impressive projector.

The 1.2:1 manual zoom range is sufficient for adjusting the image to fit your screen, but doesn't allow for a lot of placement flexibility. The HD70 will project a 100" 16:9 image from 11.5 feet to 13.8 feet. If you sit at a viewing distance of 1.5x the screen width (or 10.8 feet), you can put HD70 just behind the seating area, which will help to reduce distractions from audible noise and heat exhaust.

The HD70 has a generous, fixed throw angle offset. The bottom edge of the projected image will appear 33% of the image height above the centerline of the lens. So for example, if you are projecting a 100" 16:9 image, the bottom edge of the image will be about 16" above the lens centerline. This makes the HD70 a good candidate for table or ceiling mounting. Ceiling mounting gives you the most flexibility in arranging the projector, screen, and seating just the way you want it. However, it is more of an installation project, and the incremental cost of the ceiling mount, video cables, and perhaps some drywall work are additional factors to consider in this budget range.

Table placement is easier, quicker, and less costly. Due to the throw distance, if you place the projector on a coffee table in front of you it will mean that you are sitting further back than 1.5x the screen width. Some users will prefer that, and others won't. If you want to be closer to the screen, another option is put the unit on a low table between the seats. Rear shelf mounting above and behind the seats is also possible, but it will require a significant forward tilt to keep the projected image from appearing too high on the wall, and you'll need to use the keystone correction feature to square it up.

The HD70's remote control is similar to other Optoma remotes in that it is small, backlit, and low on clutter. Next to the Power button is a "mode" button, to switch between Cinema, Bright, TV, sRGB, and User. There are four buttons corresponding to the HD70's aspect ratios (4:3, 16:9, Letterbox, and Native), as well as common image adjustments like brightness, contrast, and overscan. In addition, there are individual buttons for the projector's sources, as well as a button to cycle through all of them -- a bit redundant. Finally, there are buttons to control both horizontal and vertical keystone without going through the menus.

The menu is divided into four subsections, labeled Image, Display, Setup, and Options. Image contains all the standard picture controls, like contrast, brightness, and color. In addition, the "advanced" menu contains settings for BrilliantColor, TrueVivid, ImageAI, gamma settings, independent red/green/blue settings, and color temperature. BrilliantColor allows for a brighter picture while maintaining color accuracy, and on the HD70 it manages to do so without blowing out highlights too severely. TrueVivid actually enhances color performance, boosting saturation and making the picture appear more three-dimensional. However, taking this control too far cuts down on shadow detail, so we left this setting on 1 (out of 3) for normal viewing.

"Display" contains aspect ratio controls, overscan adjustment, edge masking, image shift, and keystone correction. "Setup" and "Options" contain more maintenance-oriented options that you will likely only have to adjust once.

After exploring the options, we selected the settings most ideal for dark-room home theater -- low lamp, Cinema mode, with BrilliantColor at 5 or 6 and TrueVivid at 1. In this mode, our test unit measured 398 ANSI lumens. Given the contrast of the unit, this is easily enough light to fill a 120" diagonal 16:9 screen in a room with good light control. By changing over to "Bright" mode and switching the lamp to high, light output was boosted to 756 ANSI lumens. While this cuts down on contrast, it does provide a bright, colorful image that is ideal for video games in some ambient light.

Contrast performance is solid. I personally like to watch a lot of "dark" films, such as Michael Mann's Heat and Collateral. While viewing these two films on the HD70, shadow detail was nuanced and easily visible. I found myself noticing details that I had forgotten about in the two films, and I was very pleased with the HD70's dynamic picture quality.

ImageAI is becoming a staple of Optoma projectors, and functions to increase on/off contrast. When enabled, lamp mode is no longer selectable, and the projector automatically adjusts lamp power to fit the scene being displayed. For example, a bright sunny scene might push lamp output higher, while dark scenes will bring the lamp back down to its lowest output.

While this does drive on/off contrast higher, it has no effect on ANSI contrast, so any given scene viewed on its own will look the same as it did with ImageAI turned off. It also brings lamp life down from the maximum, and fan noise will cycle higher and lower. So if you're looking for the best possible performance, and you're willing to give up a few hours of lamp life to get it, it's best to leave ImageAI on.

The HD70 has comprehensive color adjustment controls which we found ourselves not needing. Our review sample was very close to 6500K out of the box, and did not require much fine-tuning. We did notice a bit of unevenness in solid colors with subtle differentiations in tone. For example, flesh tones on occasion showed a clear differentiation, essentially a line, between two very close shades of the same basic color, instead of a smooth gradient. This is due to the projector's 8-bit color processing. The more expensive home theater projectors on the market today have 10-bit or 12-bit color processing, so they can display more subtle variations in color resulting in smoother transitions from tone to tone. However, in most instances, the effect of the 8-bit processing on the HD70 was subtle and easy to ignore. Aside from this issue, color was well saturated and accurate.

Deinterlacing was better than expected for such a budget projector. The HD70 was able to deinterlace 480i material from our DVD player with near-flawless precision. We saw very few artifacts, all told. Quality was comparable to that of one of our in-house DVD players with Faroudja DCDi processing, and flipping between them yielded few differences.

The HD70 has a remarkably noise-free picture. In areas that are usually "jumping" with image noise, we saw very little to none at all. This is a definite improvement over many other projectors, and makes for a very "clean" viewing experience.

The next step up in DLP home theater projectors is the Optoma HD72, a 1280x768 machine with similar specifications and a price tag around $2000. What does the HD72 have that the HD70 does not that makes it worth the extra money?

The primary advantage of the HD72 is that its 1280x768 resolution display allows you to project 1280x720 video, 1024x768 computer signals, and 1280x768 widescreen data, all in native format without scaling. The HD70 is native 1280x720. That is fine for HD video, but data signals in XGA and WXGA format must be compressed. If you need a projector that will serve well for both video and data presentation, the added versatility of the HD72's 768-line display will better suit your needs.

The HD72 and HD70 have nearly identical throw distances - the HD72 will display a 100" diagonal image from an additional 6" away from the screen, but they are otherwise identical. The HD72's throw angle is one or two percent lower than the HD70, so both are best suited for either ceiling or table mounts.

In actual home theater usage, lumen output on both projectors was virtually identical despite the 300 lumen difference in ratings. When properly set up for dark room home theater, our HD72 measured 385 ANSI lumens while the HD70 measured 398 ANSI. On the other hand, when calibrated for video game use, the HD72 measures 985 ANSI lumens while the HD70 clocks in at 756. This incremental light output may be helpful in brighter ambient light conditions or on particularly large screens. It can also be useful in XGA and WXGA data presentation, which the HD72 is more suited to due to its 768-line display.

Contrast performance was about equal as well. The HD72 seems to bring out incrementally more shadow detail and a slightly better black level, but the difference is only really noticeable in a side by side comparison.

The HD72 shows some slightly better color performance. The tonal gradient issue that we observed on the HD70 was nowhere to be seen on the HD72, primarily due to the HD72's 10-bit color processing versus the 8-bit processing on the HD70. The result is smoother, less noticeable differentiations on the HD72 than on the HD70.

High definition content looked stellar on both projectors. However, the extra contrast and color smoothness of the HD72 help to give it an incrementally more three-dimensional picture. The HD70 still displays a fine high definition picture, but the HD72 is a bit more elegant when placed head-to-head.

Finally, the HD72 has several other features that the HD70 lacks including a DVI port (the HD70 has an HDMI port, but the HD72 has both), lower audible noise, and an overall more solid-feeling build quality. Yet the main differences are in the physical resolution and the slightly more sophisticated image quality. If 1280x768 is something that you need, then the HD72 is the way to go. However, the HD70 comes reasonably close to matching the HD72 in video performance for half the price. That is a hard bargain to beat.

The Optoma HD70 is an important projector in that it brings 720p DLP under $1000 for the first time. While it does not quite rise to the level of the HD72 in pure image quality, it delivers a bang-up image at a bargain basement price. If you've been thinking about getting into front projection home theater for the first time, we would wholeheartedly recommend that you look at the Optoma HD70. There are some fine lower resolution 480p projectors available today for even less than the HD70. But when 720p is available at this price, it's hard to say no.

For more detailed specifications and connections, check out our Optoma HD70 projector page.