The 2022 CES has come and gone, and—along with last year's all-virtual event—will surely go down in history as the oddest in the confab's 50+ year history. A show that would normally draw as many as 175,000 to Las Vegas pulled about 40,000 according to the official post-show release—a number that would have been higher but for last minute Omicron-surge cancellations by major companies and media outlets. A bartender at the Cosmopolitan, one of the most popular accommodations on the Strip, shared with me that the usually sold-out hotel was at a mere 37% capacity for CES; the cancellations came in so late and in such volume that management was unable to rebook the empty rooms. Those of us who did attend the show in person had to prove our vaccination status to pick up our badges and were handed a pair of at-home COVID antibody tests to use at our discretion. Strange times, indeed.

Inside the Las Vegas Convention Center, the empty-feeling, cavernous halls told the story of missing exhibitors and sparse attendance. Among the three major electronics exhibitors at CES—Samsung, Sony, and LG—only Samsung offered what could be deemed their normal booth offering, using the full space to show their broad range of products. Sony and LG spooned up what could best be called placeholders that allowed them to say they were exhibiting and retain their prize booth locations for next year's show. Sony devoted its booth to promoting their efforts in the production community, their prototype smart cars, and their emerging videogame developments. But none of the many exhibits touting their exciting consumer goods were on display, and a booth typically stuffed with product kiosks every few feet was wide open. LG made their entire booth a virtual tour across a wooden platform dotted with pillars sporting QR codes you could scan with your phone after downloading their app to learn about the products or interact with them in augmented reality. The company put the best spin on it they could, but a giant CES booth with zero hardware on display was a sight to behold.

That said, there was enough new projector activity to make it worth ProjectorCentral's travel. One standout was BenQ's gaming-centric exhibit room, which featured live demos of the upcoming TK700 and X3000i projectors. The TK700 is a long-throw version of the gamer-friendly TK700STi we reviewed in July; it'll have an expected street price of $1,499 and should reach market by early February. The X3000i, due in late February/early March, is BenQ's much anticipated step-up to the X1300i, touting the same bright 3,000 LED-driven ANSI lumens but also the ability to hit 100% DCI-P3 color gamut for HDR. In a dim demo room with moderate lighting, HDR game images looked great, with good zing on the highlights that we normally would never expect from a solid-state LED projector. The expected street price is $1,999. We anticipate having a review sample soon. 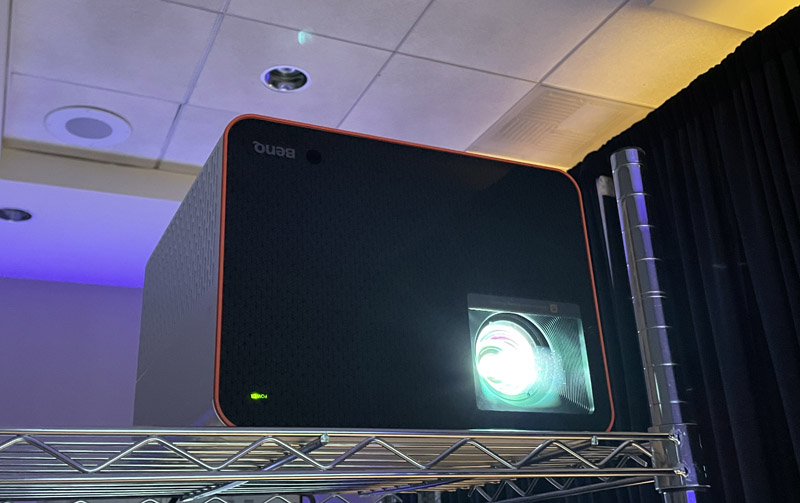 ViewSonic attended the off-site Pepcom and ShowStopper showroom events like they normally do and used the opportunity to announce the X1 and X2 LED projectors. As previously reported, these are affordable 1080p models spec'd at 3,100 LED lumens (not ANSI). Color gamut is rated at 125% Rec.709. Lifespan for the LED engine is 30,000 hours. Smart features include built-in WiFi for an onboard Aptoid streaming platform and screen mirroring. Both the long-throw X1 and the short-throw X2 are expected to ship by April, at $999 and $1,099 respectively.

Panasonic also had an unusually sparse booth, but built a big, tall room for an immersive four-wall display to show off the capabilities of their commercial large-venue projectors. The company used the occasion of CES to announce their partnership with a nearby exhibit/entertainment space off the Vegas Strip called AREA15, where their projectors are used in the public space for projection-mapped artwork and behind the scenes at art exhibits—such as Van Gogh: The Immersive Experience, which has also been installed in some other cities around the country. (Highly recommended, by the way).

By far the best home theater projection demo was in JVC's room at the Venetian Tower, where the company showed some of the most stunning and mesmerizing images I've seen on any screen. The company's new flagship laser projector, the DLA-NZ9/DLA-RS4100 ($25,999), was showing off native 8K/60 Hz content that took full advantage of JVC's new e-shiftX technology. Combined with the projector's full bandwidth HDMI 2.1 ports, the 240 Hz pixel shifting with native 4K imaging chips renders every pixel in an 8K/60 signal. The detail on the 124-inch diagonal, 16:9, Stewart StudioTek 130 G4 screen was staggering, and the frame-adapt tone-mapping on the custom content showing architecture and nature scenes produced by Jacob and Katie Schwarz at Mystery Box provided for breathtaking HDR. 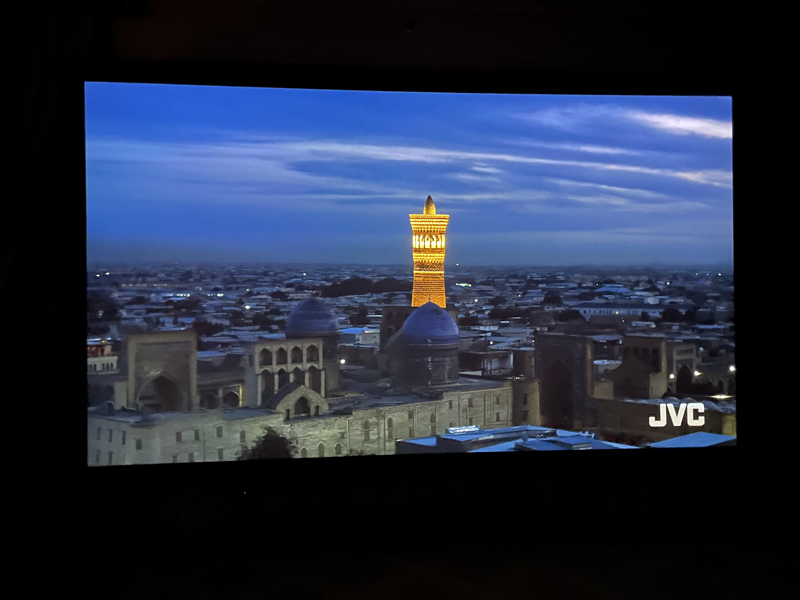 Hisense devoted a nice section of its booth to its Laser TV products including the L9G TriChroma UST we reviewed recently. But the most eye-catching display featured two of these side by side assisted by edge-blending software to show a 210-inch (17.5 ft) wide by 59-inch tall image on a custom ALR screen that was essentially equivalent to two 120-inch, 16:9 diagonals put together. This application is used overseas for digital signage and there are no immediate plans to bring it to the U.S., but I can see how a version of this package engineered to achieve a 2.4:1 'Scope-style aspect ratio would have its appeal, particularly among custom installers who could hide the projectors below deck in custom cabinetry.

Behind the scenes at the Hisense booth a company executive showed me a static sample of the just shipping PX-1 PRO UST, priced at $3,499, which we expect to have for review shortly. It's similar to the L9G in features but sold without a screen; it'll focus an image ranging from 90 to 130 inches. It's also officially designated a Laser Cinema product vs. Laser TV, which means it's designed primarily to optimize the dark- or dim-room home theater experience. Hisense intentionally tamped down the brightness to 2,200 ANSI lumens from the 3,000 offered in the L9G to improve black levels even further, but the three-laser architecture is still there to achieve better than 100% BT.2020 color gamut with HDR. In other words, it's the UST many enthusiasts have asked for: a high-performance ultra-short throw replacement for the classic long-throw home theater projector. We'll see how it does in our evaluation.

A final Hisense highlight was the proof-of-concept demo of a prototype, three-laser TriChroma projector claiming 8K resolution—technically 7860x4320 pixels—using custom DLP DMD technology developed by Hisense with Texas Instruments. This was a long-throw projector casting to a 120-inch screen in a dark room. It featured 4,000 ANSI lumens of brightness and 107% BT.2020 gamut. Not surprisingly, the prototype was housed in a rather large non-descript cabinet on a suspended shelf. 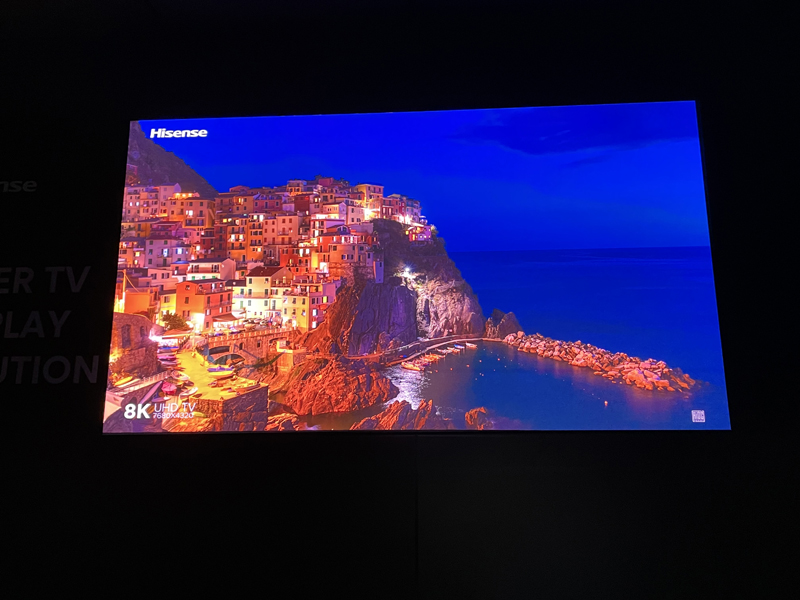 It is a sign of the evolving projector market that the sizable Samsung exhibit space and vigorous messaging devoted to its new Freestyle projector amounted to a remarkably big deal being made about a very small thing. As you can read in our detailed review, the product is (by today's standards) a fairly low-powered (about 240 ANSI lumens) portable LED lifestyle projector in a clever coffee-can form factor, enhanced by a variety of thoughtful accessories ranging from a swivel base to a battery pack to a diffuser cap for ambient lighting to a lamp-socket power converter that lets you screw it into a traditional bulb receptacle. It further distinguishes itself with WiFi connectivity and the excellent streaming platform borrowed from Samsung's TVs, as well as shockingly extensive calibration tools (also taken from their flatpanels) that allowed our reviewer Mark Henninger to tune its 1080p SDR image to a fare-thee-well. And I should mention that it also functions as a smart speaker.

But what's really new here is Samsung's aggressive marketing of "The Freestyle" as a flexible, small-screen display intended for a variety of entertainment and productivity functions around or out of the house. Samsung even went as far as placing guerilla marketers on the Vegas Strip at night to demo a battery-powered Freestyle to passersby, using a large poster-board as the screen. The Freestyle captured gobs of attention at CES, and though not cheap at $899, it's a good bet to bring plenty of first-time buyers into the projector market. Competitors in the emerging lifestyle projector space would be wise to take notice.

Comments (4) Post a Comment
Chris Posted Jan 11, 2022 6:07 PM PST
I am really excited to know you are going to review the Hisense PX1-Pro since I have a home theater and an older projector projecting on a 100 inch Stewart Balon Borderless Firehawk G-5 screen with a 1.1 gain and ~73 % ALR property .
Rob Posted Jan 13, 2022 2:47 PM PST
I am infatuated with ultra short throw projectors. Unfortunately I am extremely sensitive to RBE. It may come from lots of years of VR/high refresh rate gaming that makes me eyes notice it more.

It seems Epson with their 3LCD vs the usual DLP for UST is my only option.

Any news from Epson on a ls500 successor? Or any news from other brands about non-DLP UST projectors?

Thank you for this great write up!
Rob Sabin, Editor Posted Jan 15, 2022 8:41 AM PST
No word yet from Epson on a successor model, but I believe we are due for some new product news from Epson in the coming days, and it would not surprise me if they have something coming. The LS500 was somewhat behind the times from the day it was released and has quirks that came out of its evolution from a commercial UST platform that Epson adopted for a home projector. The LS300 follow up, a 1080p model, is far more elegant from the perspective of a home theater appliance. I would assume (though with no inside knowledge) that something in that vein in a 4K UST would be on Epson's roadmap. Also, Epson recently released a long-throw 4K laser projector in Europe that uses a new LCD chip with a higher pixel count that allows them to achieve full 4K UHD resolution with their traditional two-phase pixel shifting, similar to what the larger 0.66-inch 4K DLP chipset does. I am hopeful that Epson's next UST will feature a similar arrangement. But this is all just speculation and hope on my part.
Branden Bates Posted Jan 16, 2022 9:42 PM PST
Our last projector died New Years Day. I've had my eye on the x3000i for the last few months. I am looking forward to your review.